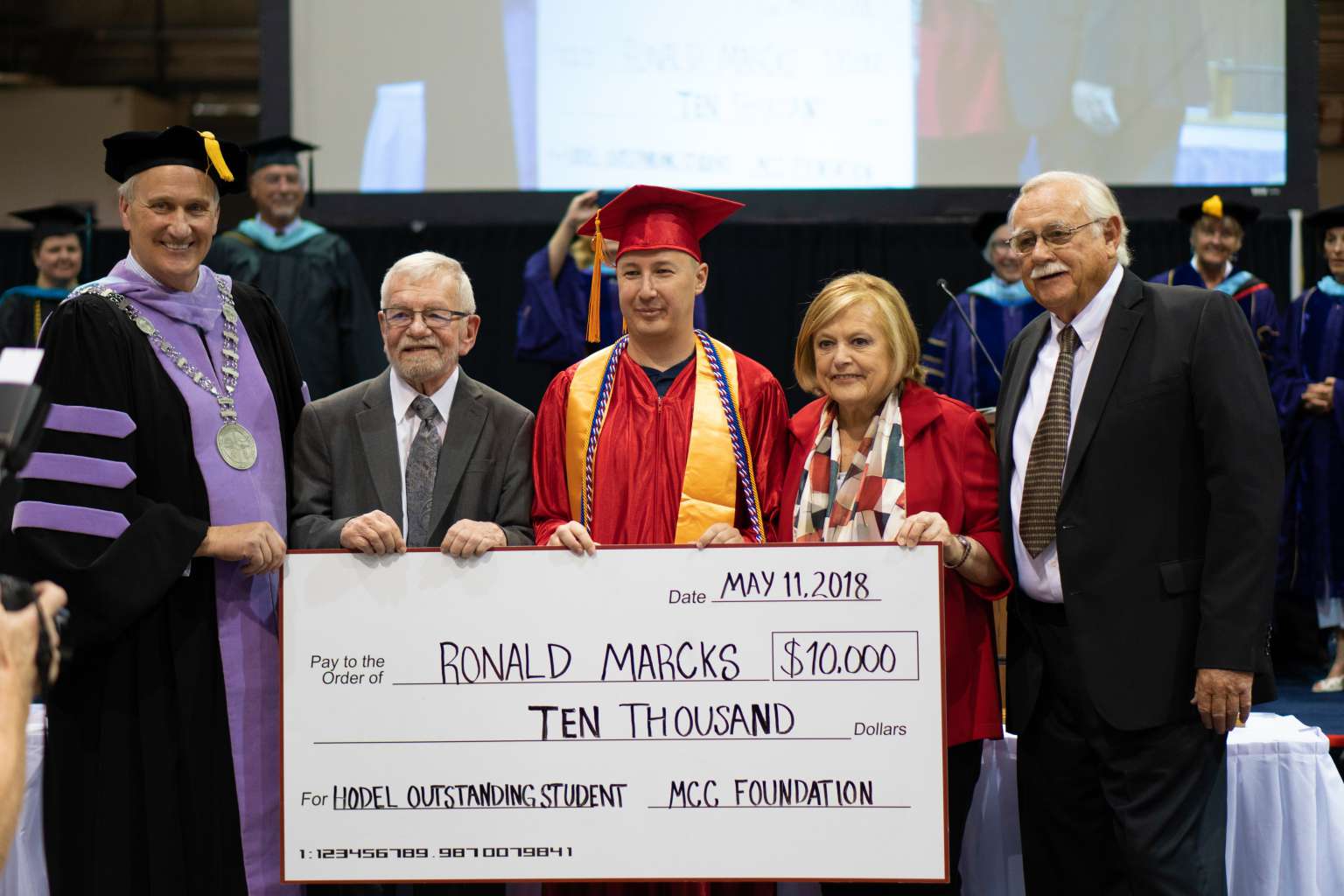 Posted on October 12, 2018 in Press Release.
Bookmark the permalink.


When Ronald Marcks graduated from Mohave Community College with an associate degree in liberal arts, he also received a check for $10,000.

He is the college’s the first annual Kathy Hodel Most Outstanding Student Award recipient.

“I was stunned,” said Marcks, who had not even applied for the award until his instructors and friends pressured him.  “I was actually pushing for Reyes, a friend of mine to win it, but then he and my instructors asked how I would feel if Reyes didn’t win?  That made me realize I would regret it if I didn’t apply.” 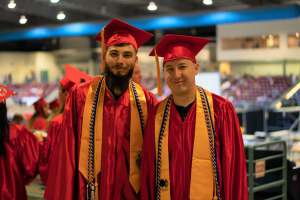 Reyes Lerma (left) and Ronald Marcks at the MCC 2018 Graduation.

During the award presentation, MCC President Dr. Michael Kearns said Marcks far exceeded all the award requirements, which included a minimum of 30 hours of service to the community.

“Ronald Marcks also received glowing reviews from faculty, staff and community members who worked with him,” said Dr. Kearns, who read to the graduation audience of several thousand people, part of a recommendation letter from Susan Chan, executive director of Kingman Academy of Learning.

“After a page-long glowing review, in the end she said, ‘I could go on and on about the things Ronald Marcks has done to better our school and community. He is a caring individual who gives of himself freely and I can confirm at least 75 hours that he has volunteered for our school over and above his practicum hours and teaching hours.  He is most certainly worthy of this award.’”

Money for the annual award comes from a $200,000 endowment set up by Dr. James Childe, a retired attorney and former MCC business instructor.

Dr. Childe created the Kathy Hodel Most Outstanding Student award to help honor outstanding MCC students and Kathy Hodel for all of her work promoting the college through the MCC Foundation.

Hodel, her husband Don, and Dr. Childe were on stage to present the award to Marcks, which was preceded by an award video that can be viewed on the MCC website at www.Mohave.edu/Kathy-Hodel.

2018 is a banner year for Marcks, who along with the award and his MCC associate degree also earned his bachelor’s degree in elementary education from Northern Arizona University.

“Thanks to the way MCC and NAU have it set up, I took all my NAU classes at MCC and didn’t have to go to Flagstaff,” said Marcks.  “It’s all set up though the ITV system, which means the NAU professors were right there live in front of you on the screen and you can ask questions and get your bachelors done at any MCC campus.” 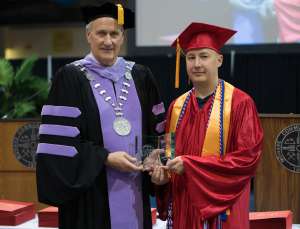 Marcks moved to Mohave County in 2011, after ten years of service in the Air Force guarding nuclear weapons. 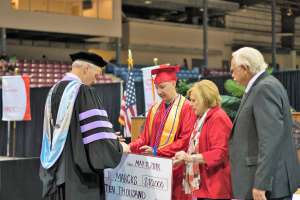 During his time in the Air Force, his parents moved from California to Kingman.  After being away for a decade, he said he wanted to move closer to his family, “and the low cost of living in Kingman doesn’t hurt either.”

He used his Veterans Administration benefits to pay for his college education and plans to use the money from the Hodel Award to help pay for his master’s degree in education.

While earning that degree he plans to work with the schools in Kingman.

“Ever since high school, it’s always been in the back of my mind that I want to be a teacher,” said Marcks, who was inspired to become a teacher because of lessons learned from one of his own high school teachers. “He always connected with the students so well that he made a big difference in so many lives.  He was really inspiring, and that’s the kind of teacher I want to be for my students.”